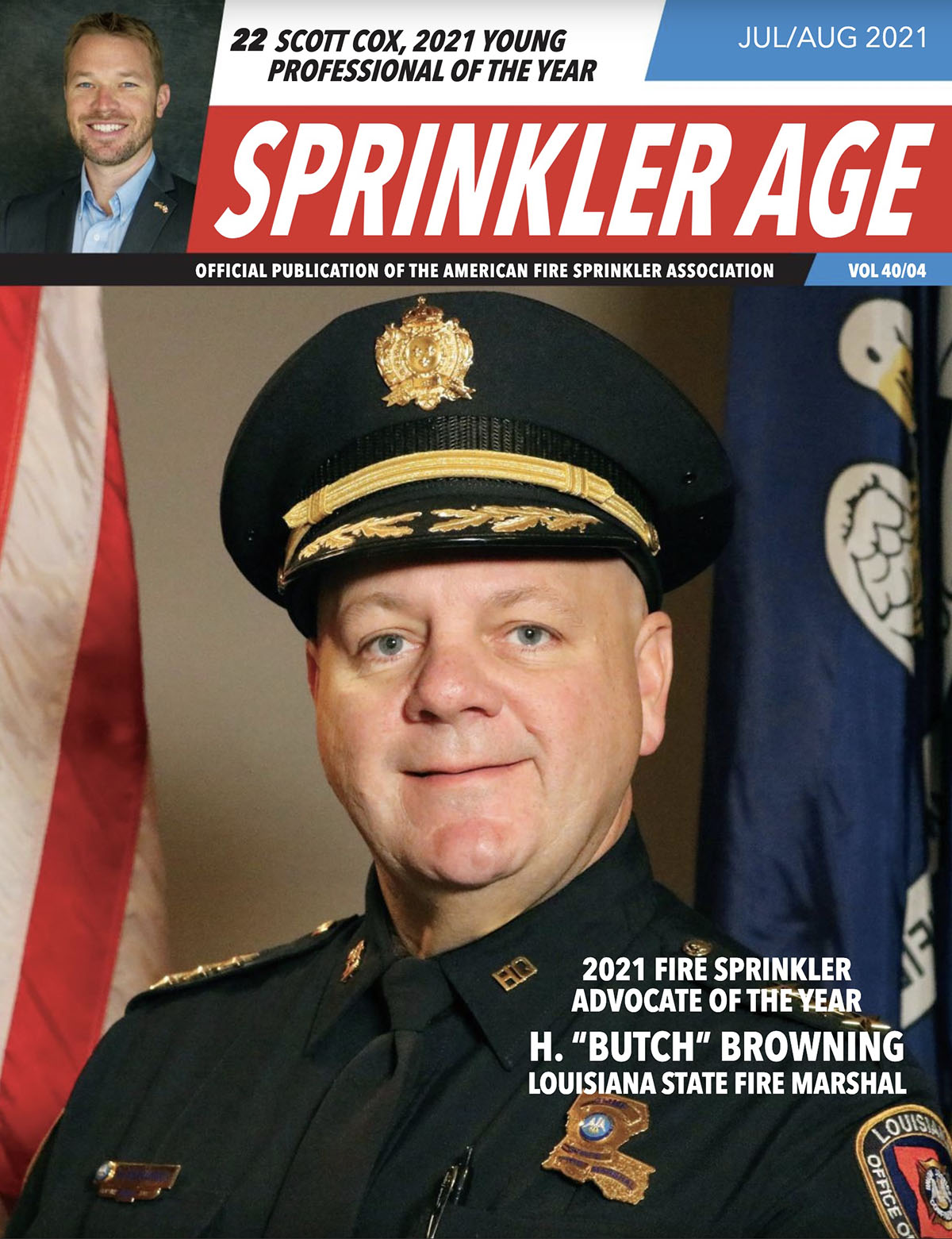 Having grown up in the fire sprinkler industry, Scott Cox is keenly aware of the places the industry excels and the areas in which it needs growth. Often discussed but also elusive areas to tackle are the recruitment, training, and promotion of the next generation of fire sprinklers professionals. Who will take over when the current workforce is ready to retire? There is more sprinkler work each year and less available workforce. These thoughts sit heavy on the mind of many fire sprinklers professionals like Cox. However, he has risen to meet the challenge head-on by bringing new people into the industry. Growing up in the industry has given Cox insight and a unique perspective on the industry’s acknowledged need for new blood. He works hard to promote the industry to young professionals as the attractive and attainable option that he knows it to be. From conceptualizing to developing, heading, and spreading the word about next-generation opportunities in Florida and beyond, Cox does it all. He not only works on these initiatives in his own company but also develops opportunities in the industry in Florida and across the country through his work with the American Fire Sprinkler Association’s (AFSA) NextGen and other trade associations.

For these reasons, AFSA is pleased to announce that Scott Cox of Cox Fire Protection in Tampa, Florida, has been elected by his peers as the recipient of AFSA’s 2021 Young Professional of the Year (YPY) award. The award highlights the efforts of a young and talented fire protection professional under 40 who demonstrates exemplary technical, professional, and inclusive leadership skills in their businesses and at a national level. The sixth annual award will be presented during the general session of AFSA40: Convention, Exhibition & Apprentice Competition at the JW Marriott Hill Country Resort & Spa in San Antonio, Texas.

A LITTLE BIT OF FATE AND A LOT OF HARD WORK

Scott Cox’s father, Ron Cox, started Cox Fire Protection when he was just two years old. Cox recalls fondly, “Even before I worked with them, I grew up with the guys at Cox. They are my family. I was brought up with these guys, and now I even have the honor of working with them.” Cox has memories of working in the office with his family as young as 12, helping with easy tasks around the office such as cleaning up and filing. In high school, when he was old enough to begin learning his way around the business, he started working on jobsites in his free time. Cox chuckled as he recalled being “voluntold [by his parents] to go work out in the field to help save for college or extra spending money.”

Despite his upbringing, Cox’s path temporarily diverged from the fire sprinkler industry when he attended college in Indiana. After graduating with a Bachelor’s degree in history in 2006, Cox decided to move back to Florida with his wife. He didn’t plan to stay, though, intending to use the time to pay off student loans before going to graduate school. But in 2007, the great recession struck, turning Cox’s plans upside down.

So Cox continued working at Cox Fire Protection, initially as a designer. Linda Cox, Scott Cox’s mother who nominated him for the award, described Scott as “[realizing] that fire protection was going to be a life-long passion.” However, that passion just didn’t lie in design, so he moved into sales and project management. He operated in that capacity until 2013, when he stepped up to sales manager/director of preconstruction. With this move, Cox also transitioned into his first management role, which afforded him time on the road visiting the company’s other branches in Ocala and Jacksonville. This travel experience helped him understand the overall state of the fire sprinkler industry in Florida. In 2015, Cox was promoted to vice president and continued to oversee sales and project management, culminating in the 2017 opportunity to buy into ownership of Cox Fire. Over the past four years, he has been co-owner and president of the company.

However, his journey hasn’t stopped by “reaching the top.” Every year Cox continues to innovate and grow his company in new ways that both challenge his employees and offer opportunities for new hires to gain invaluable experience and train up the next generation of fire sprinkler contractors.

For example, over the past two years, Scott and his development team have built a fully functioning lab on Cox Fire’s property in Tampa to offer new hires hands-on opportunities with various types of fire protection systems before they deal with those systems in the field. The lab is also used as an awareness and training resource to property owners, property managers, architects, engineers, and local Authorities Having Jurisdiction (AHJs).

Flashing back to early in his career, Cox had an influential experience that helped spark his passion and has guided much of his work with the next generation. In 2013, Cox attended Leadership Tampa, which is hosted through the Tampa Chamber of Commerce. Cox says that program opened his eyes to a problem he wanted to tackle. “There was a real lack of leadership programs in the area and, especially for our industry, there was a real lack of local fire protection leadership programs for young professionals.”

With an existing passion for educating the next generation of fire sprinkler workers in Florida and the spark of newly gained knowledge from the Leadership Tampa program, Cox approached the local Associated Builder and Contractors (ABC) Chapter and in 2014 launched a NexGen program with them. This program was designed to be a leadership track for young professionals in the fire sprinkler industry and to “… offer young professionals across industries the opportunity to learn from top experts in the construction industry, across a broad range of topics,” explained Cox. The program was a success and is still going strong in its seventh year. The opportunity to participate in that group has become highly competitive, emphasizing the need for this training for young professionals on the local level.

As far as AFSA NextGen, Cox says to him it’s simply a matter of “if you don’t make things a priority to you, then they’ll never become a priority.” After his success starting the ABC NexGen program in Florida, Cox prioritized jumpstarting AFSA’s NextGen within the AFSA Florida Chapter.

“I often found myself at the meetings seeing the same faces over and over. Growing up in the industry, I knew that there was an important need to bring in new young people to the group,” recalls Cox. “However, I know sometimes it’s intimidating going somewhere new where you don’t know anyone and aren’t sure if you’ll be able to connect with people your age.”

So Cox helped to develop a space for those young people to network with peers by starting a NextGen Initiative in Florida. The group’s involvement in the chapter started simple—helping with the golf tournament—which is now a huge driver for membership. Under Cox and other NextGen members’ supervision, the golf tournament has raised over $75,000 for charity since its inception. Additionally, NextGen sponsors training and networking events for the under-40 members of the chapter.

Beginning with Cox, NextGen now has a seat on the AFSA Florida Chapter board. In addition, he has helped other NextGenners become involved in leadership roles. “We have four NextGen members on our board, and one is also on the AFSA Florida executive board. I think in the last few years, we’ve made great strides in getting younger people involved in the local chapter and board.”

Cox’s advice for those looking to create or expand a NextGen program near them? “I think it starts with getting a group of folks together who are passionate about NextGen, and then it’ll grow from that passion.”

Cox also serves on the AFSA National NextGen Committee, where he helps shape programming that serves the NextGen nationwide, including the annual NextGen Day at AFSA’s annual convention and quarterly webinar training.

One NextGen Initiative that is close to Cox’s heart is mentoring. “It’s so important to focus on mentorship and to have a good mentor,” says Cox. “I had a couple of mentors who really fueled my career.” Cox believes it’s crucial for NextGen to find mentors in their lives and that a good mentor/mentee relationship is invaluable for a career. “I’ve had a few different mentors, including my dad. He’s brilliant in sprinklers and brilliant in business. It’s helped me to learn from him.”

Currently, the NextGen Initiative is hosting quarterly webinars covering mentorship topics for young professionals in all aspects of the industry and all steps of a mentor relationship. Keep up-to-date with all AFSA NextGen events and programs at www.firesprinkler.org/events.

Good leaders are innovators, forging a path for others to follow. Great leaders, however, inspire others to aim higher, dream bigger, and achieve greater and Cox is nothing short of a great leader.

“I am thankful for my family and friends who have supported me through the years, and to the entire Cox Fire family who work so hard that provide me the opportunity to devote time to the industry and AFSA,” says Cox. “I was honored to have been nominated for this award, and am speechless to be the recipient. It is an even greater honor to be placed among the distinguished ranks as those of past award recipients who have made such important and incredible contributions within their own companies, to the employees and the families of those companies, and to our fire protection industry as a whole.”

This year marks the 6th annual YPY award—presented by AFSA’s young professional group, the NextGen Initiative (NGI). AFSA’s NGI is on a mission to recognize the outstanding talent and achievements of young professionals in the fire sprinkler industry. These young professionals aged 40 and under can be described by a variety of adjectives—movers and shakers, innovators; but by all definitions, NGI’s YPY award winners are most recognized for how they shape the business landscape with their passion and sense of community. The award also seeks to promote the emergence of young, talented professionals and inspire companies to invest even more in the development and excellence of the profession.

“Scott’s passion for advancing the next generation of the industry shines through in all of the work he does at both the local level in Florida and the national level serving on the NextGen committee,” comments AFSA NextGen Initiative Chair Meaghen Wills, Anchor Fire Protection Co., Perkiomenville, Pennsylvania. “I admire the way he’s grown the number of opportunities for young professionals in Florida and beyond.”

“Scott brings a ton of excitement and energy to anything he is involved in,” says AFSA Region 4 Director Chris Johnson, president of Piper Fire Protection, Clearwater, Florida. “I serve with him on our Florida AFSA Board as well as on the Gulfcoast ABC Board. Scott is passionate about training and mentoring others and has been a leader of both organization’s Next Gen initiatives. He never hesitates to evangelize fire sprinklers, the greater construction industry, or the merit shop philosophy to anyone he comes in contact with.”

The Young Professional of the Year award will be presented to Scott Cox during the general session on Monday, September 20, at AFSA40: Convention, Exhibition & Apprentice Competition in San Antonio, Texas. Learn more and register to attend at www.firesprinkler.org/AFSA40. For more details on AFSA or its NextGen Initiative, visit www.firesprinkler.org/nextgen.